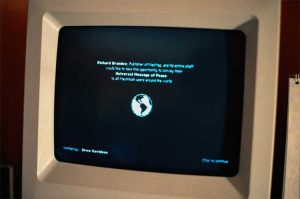 Magmag was a virus that surprisingly, was not all that bad to have on your computer. As crazy as that may sound. The MacMag virus latched itself onto your computer with one goal only, and that was to spread the word of world peace.

MacMag limited itself to only Mac computers, and when you got the hack, it would temporarily turn your screen black with a pixilated icon of the Earth, as well as a message from the developer.

“Richard Brandow, Publisher of MacMag, and the entire staff would like to take this opportunity to convey their Universal Message of Peace to all Macintosh users around the world.”

The virus would then delete itself from the computer. This virus was created in 1988, and of course, did not do any damage to the host; that is unless one of the receivers who got it was not that big of a fan of world peace.